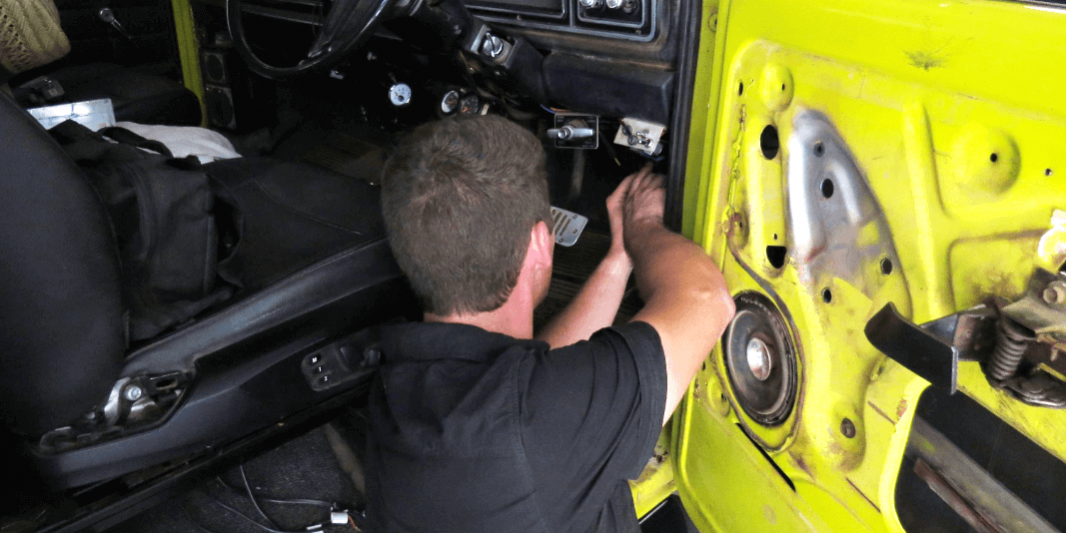 This is our ongoing project vehicle. With so many items and systems to repair and upgrade, this F-250 ute will certainly be a regular feature!

The latest upgrade was wiring up electric seats. We was called to wire up the electric bucket seats that were fitted to replace the aged (and very expensive to repair/replace) bench seat. The new seats were out of a 3 series BMW and were full leather.

Wiring up electric seats on the passenger side was nice and easy, as it was only requiring 12v power to be fully operational using the original BMW switches mounted on the side of the chair.

The driver’s seat was a different story! We quickly discovered it was an electric memory version, meaning it has 3 preset and programmable seat positions for different drivers, controlled by a under seat computer, which relied on a network connection with the original BMW body module to work. Seeing as this seat’s new home has never heard of a computer, we had to get creative. Unfortunately, we had to sacrifice the memory function, but as there was only one main driver, this wasn’t a big issue. By mounting and wiring up four, double pole, double throw toggle switches, the eight-way seat was fully controllable.

Now in their new home, these seats all work, look great, and most importantly, are comfy.

If you’d like to learn more about installing electric seats on your car, contact us today here.

Complete rewire of a 1968-69 Volkswagen Beetle

Volkswagen Beetle from the late 1960s, complete rewire. We carried this work out for a local body shop who were restoring this classic beetle back to its former glory. As simple as these old cars are, there is still a surprising amount of wiring in them, so with a trusty one-page wiring diagram, we set to work.

Jaguar XJS Pre HE1977 5.3 Litre Auto Sport. We got called out to have a look at a few faults on this V12 Jaguar, the main one being the cruise control not working.